Rat control at a commercial building in Marietta

There are many species of rats, but the two species that most often become pests in Metro Atlanta and throughout Georgia are the roof rat (Rattus rattus), and the Norway or brown rat (Rattus norvegicus). Although both rat species are found in both urban and rural areas throughout Georgia, roof rats are slightly more common in wooded rural areas, and Norway rats are more common in urban areas such as Atlanta and Marietta.

In nature, roof rats (also known as black rats or tree rats) live in trees and spend most of their time aloft. In Atlanta and throughout Georgia, roof rats are most often found in attics and roof soffits.

Roof rats are smaller and slimmer than Norway rats, have exceptionally good balance, are excellent climbers, and can chew holes through many building materials. Their biology and behavior, as well as the damage they do, are very similar to those of grey squirrels; but because roof rats are slimmer animals, they can get into attics through smaller openings than squirrels need. They usually get into homes and other buildings from nearby trees, especially if the limbs touch or overhang the house, or by running along aerial wiring that enters the building. They can also climb walls very well if they need to, and can travel inside wall and ceiling voids once they get into a building.

Norway rats (also known as brown rats, sewer rats, water rats, or wharf rats) are burrowing animals by nature; but they're also happy to live in homes and other human-occupied buildings if given the opportunity. They have powerful teeth and jaws and can gnaw through most building materials. Quite often they'll burrow and gnaw their way into basements, crawl spaces, and gaps under sheds and storage buildings. Once they're inside a building, they can make their way through wall and ceiling voids and may migrate upwards, especially if that's where the food is or if population pressures force them to move. Norway rats are also excellent swimmers and are often found in sewers and around wharves and piers. And yes, rats can swim up into a toilet.

In short, Norway rats usually start at the bottom of a building and work their way up if they have to, and roof rats usually start at the top and work their way down if they have to. But these are just generalizations. Either specie can be found anywhere in a home or building. Once in a while, both species may be infesting different parts of the same building. You won't find Norway rats and roof rats in the same part of a building, however. Despite being close relatives, the two species do not get along at all.

Rats were the first species of wildlife known to spread diseases. Historical evidence suggests that rats have been associated with disease even before biblical times, and practically all epidemiologists believe that rats were a big part of the reason for all of history's great plague epidemics. Specifically, rats are reservoirs for Yersinia pestis, the bacterium that causes plague. The fleas that feed on the rats then vector the disease to humans. Rats are also associated with the transmission of leptospirosis, rat-bite fever, salmonellosis, and many other diseases.

The rat's unique place in the history of disease also gave birth to the profession of pest control. The first exterminators were called "rat catchers," and they did their job pretty much the same way Rid-A-Critter does today: by trapping rats and permanently sealing them out of buildings.

Almost any building is vulnerable to rat infestations. They can even get into brick houses. We find those vulnerabilities using time-honored methods like looking for droppings and following rub marks, as well as using high-tech methods such as night-vision cameras. However we find them, we seal up the openings to keep rats out of the home or building.

Why Non-Chemical Rat Control and Exclusion is Better

There are quite a few problems with using chemical rodenticides for rat extermination. When you consider them all, we think you'll agree that Rid-A-Critter's safe, non-chemical approach is the best way to solve structural rat problems. Instead of poisoning rats, we seal rats out of your house and make it rodent-proof without using poisons. Our non-chemical method has many advantages over chemical rat control. Let's talk about some of them.

Rodenticides are poisons. Although this may seem redundant and obvious, the fact is that any poison we put into the environment has the potential to harm non-target animals such as pets, livestock, and wildlife. In the case of rat poisons, this actually is more common than most people realize. Many rodenticides are secondarily toxic, which means that an animal that eats a poisoned rat can be poisoned, as well. So if a hawk or a fox eats a poisoned rat, the hawk or fox may die, too. 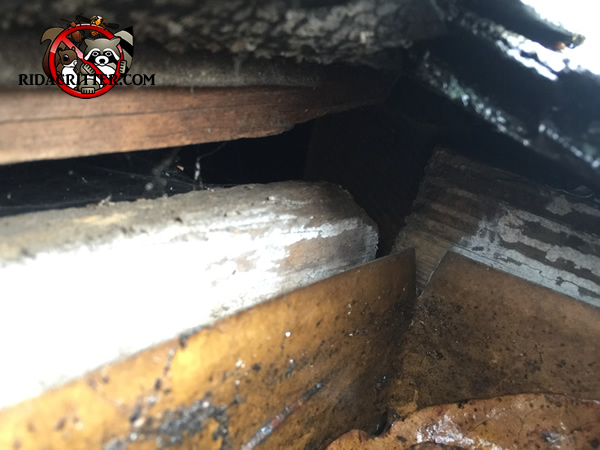 Most poisoned rats die where they lived. Don't believe that nonsense that poisoned rats "go outside to seek water." Most rodenticides take several days to work, during which the rat begins to feel progressively sicker; and just as is the case with people, when rats start to feel sick, they go home. If the rat's "home" happens to be your home, then that's where they're going to die. And stink.

In fact, we do a lot of work finding and removing dead animals that were killed by the poisons that other rat exterminators left behind. It's not the most pleasant work that we do. Trust me on that. It also would have been entirely unnecessary had the job been done properly -- by trapping and removing the rats, and then sealing up the house -- rather than just tossing some poison around and calling it a day.

Non-chemical rat control is cheaper in the long run. When you pay an exterminator to control your rat problem using rodenticides, you make a friend for life: the exterminator. That's because the poisons exterminators use don't last forever. Rodenticides used inside or outside get eaten by rats and need to be replaced. They also get eaten by insects such as beetles, weevils, and moths. Even wax-encapsulated, "weather-resistant" rodenticides often get infested by insects or rot away because of mold.

As a result, rat control that relies on poisons while neglecting the more important work of rat exclusion requires that the exterminator visit you -- and bill you -- again, and again, and again, to check and refill the bait stations. That starts getting expensive after a while.

Are Rodenticides Ever Needed?

Sometimes they are outdoors; but not inside a building unless it's scheduled to be demolished. Trapping and removal is the right way to do interior rat control.

Exterior use of rodenticides is sometimes used as part of wide-area public health rat abatement programs, and some as commercial food-processing facilities may be required by law or by the sanitation standards of their industries to have rodent bait stations installed around the exterior perimeters of their buildings. Most of the time, however, rat poisons are neither necessary nor desirable. Safe, permanent, non-chemical rat removal and exclusion is always the better way to eliminate rats from a building.

If you need roof rats or Norway rats removed from your Metro Atlanta home or business, please contact us for more information about our non-chemical, exclusion-based rat-control programs.

Here are some randomly-selected pictures we've taken at the many rat-removal and rat-proofing jobs we've done throughout Metro Atlanta.