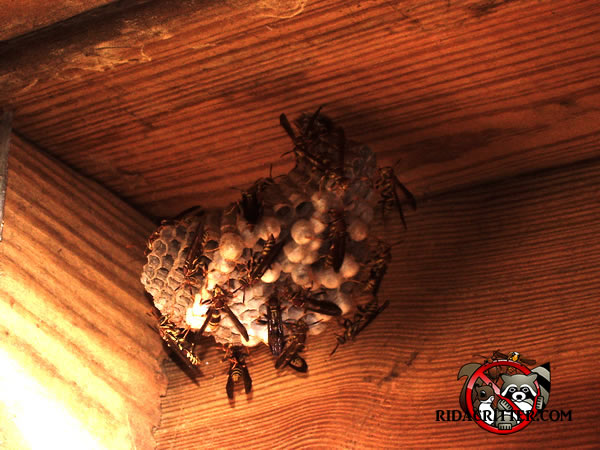 Paper wasps in an attic in Atlanta

There are more than 100,000 species of wasps, all told. The ones mentioned on this page are just the few that we encounter most often in the Metro Atlanta and the surrounding areas.

Many people refer to all stinging insects as "bees", but that's not quite correct. Wasps and bees are related, but only distantly. Like true bees such as honey bees and carpenter bees, wasps are members of the order Hymenoptera, which also includes ants. But that's where the relationship ends.

One of the things that differentiates bees from hornets and other wasps is that bees make honey and wax, but wasps don't. On a practical level, that means that it's usually not strictly necessary to remove wasp and hornets' nests once they're treated. When the nests are exposed (as is usually the case with paper wasps, mud daubers, and hornets, for example), we do remove the nests because they're unsightly. But when the nests are inside an attic or a wall or ceiling void (as is usually the case with yellow jackets, for example), we typically don't remove the treated nests unless the customer requests it. Most customers don't because removing a wasp's nest that's inside a wall or ceiling void would require cutting holes through the Sheetrock, which simply isn't worth it if the nest is dead and doing no harm.

Wasp species vary greatly in their habits, appearance, and aggressiveness. Some wasps, like many paper wasps, are relatively passive and won't bother you unless you bother them, even if you're in close proximity. Others, like yellow jackets, will readily attack in great numbers if you get too close, but usually won't bother you if you keep your distance. And then there are the hornets, who are very unpredictable. They'll often attack en masse if you so much as look at them funny.

What this means from a practical standpoint is that unless you're really sure what kind of wasps you're dealing with, do-it-yourself wasp control probably isn't something you should try. Some wasp species can put a serious hurting on you if you happen to rub them the wrong way. So be safe. Call us instead.

Let's look at some of the more common stinging wasps found in Atlanta and throughout Georgia. 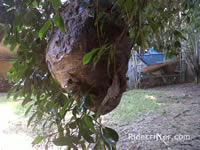 A baldfaced hornets' nest in a tree in Atlanta

Baldfaced hornets are stocky, predominantly black wasps with white or pale yellow markings. They build paper nests that usually are suspended from or attached to trees, porch ceilings, power lines, and other objects. They also are, by far, the most aggressive of our Georgia wasps, and are very unpredictable. You might walk past the same hornets' nest every day without them bothering you; but then one day they change their mind, decide that you're a threat, and attack you.

When hornets attack, they do so in great numbers, and their stings are intensely painful. They also can cause severe swelling and anaphylaxis. Even people who aren't particularly sensitive to insect stings may need medical care after being attacked by a large number of hornets. That makes hornet control a pretty poor choice for a do-it-yourself project.

It's hard to say with any certainty why hornets are so unpredictable. One possibility has to do with the sentries. Hornets' nests always have two or three individuals who are assigned to fly around right outside the nest and keep a watch for dangers to the colony. These sentries work in shifts, and it may be that some sentries are more easily alarmed than others are. 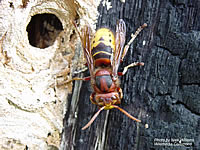 European hornets are common in Atlanta and throughout Georgia

European hornets are larger than baldfaced hornets and have a loud, frightening buzz. They have large heads and beautiful coloration consisting of dark orange with yellow and black markings.

Unlike baldfaced hornets, European hornets usually build their nests in hollow trees or other protected void areas, so you're more likely to see the insects than their nests. You might smell their nests, though, especially when they're built inside a home. Their droppings have such a strong and unpleasant odor that it's sometimes necessary to remove the nests from interior wall and ceiling voids just to get rid of the odor.

Despite their size, loud buzz, and horrible stench, European hornets are less aggressive (or at least more predictable) than baldfaced hornets. If you keep your distance, they usually keep theirs. But when they do attack, they do so with gusto; and their stings are very painful. 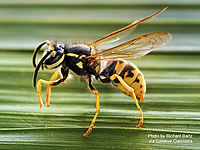 Yellow jacket wasps are common in Atlanta and throughout Georgia

The term "yellow jacket" is a generic one that's applied correctly to a number of different wasp species, and incorrectly to many more. The yellow jackets we get in Georgia are usually various species in the genus Vespula. The one in the picture on the right happens to be Vespula germanica, which is also referred to as the European wasp (which is not the same insect as the European hornet) or the German yellow jacket.

Yellow jackets build nests out of paper, and those nests can get quite large -- as big as several feet across in some cases. They usually build their nests in protected void areas like hollow trees, wall voids, roof soffits, attics, abandoned cars and trucks, and other such areas where they think they'll be left alone. Very often, the visible entry holes are quite far from the actual nest.

Compared to our other Georgia wasps, yellow jackets rank roughly on the same level as European hornets in their degree of aggressiveness, which is to say that they usually won't bother you if you keep a respectable distance from their nest. But if you get too close for their liking, they will attack in great numbers, and their stings are very painful. 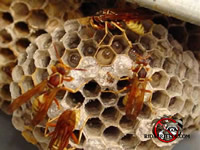 There are many, many species of wasps referred to as "paper wasps," all of which build nests out of paper. They usually build them in semi-exposed areas such as the undersides of window frames, soffits, and so forth, so the nests are covered on top but otherwise exposed. Some species build their nests flat against the surface, while others build nests with narrow "petioles" that hang from the surfaces they're attached to.

Some paper wasp species are loosely social. Their colonies are quite small in numbers compared to most other social wasps, with some "colonies" consisting of only one adult female and her young. Other paper wasp species are solitary, but commonly build nests near nests of other wasps of their specie (yet without any evidence of cooperation between the adjacent nests).

Most paper wasps are not especially aggressive, but they will attack if they feel threatened. How much is takes to make them feel threatened varies from specie to specie, however. Some species are very territorial, while others are more easygoing. Either way, if they do sting, their stings can be very painful. 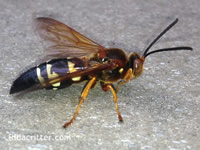 Cicada killers (sometimes called "lawn wasps") are among Georgia's largest insects. They have very similar coloration as yellow jackets and are often mistakenly described as "huge yellow jackets" by non-professionals. They have an interesting life cycle that is also the reason for their name: A female cicada killer catches and paralyzes a cicada, drags it into her nest (a hole in the ground), and lays an egg on the cicada. Within a day or so, the eggs hatch, and the larvae eat the cicada.

Male cicada killers can be very intimidating because they fly aggressively, make a loud buzz, and sometimes even head butt you if you get too close to their mates' nests. But the males have no stingers, so it's all for show. All the males can really do is annoy you a bit. They also are very territorial with regard to other males and can often be observed fighting each other.

Female cicada killers do have stingers, but they're fairly passive insects who usually don't sting unless you do something dumb like stick your finger into their nest hole. And really, who can blame them for that?

Other than being annoying (especially when present in large numbers), cicada killers are disliked primarily because of the damage they do to lawns. Being very large, the holes they make in a lawn are very visible.

As their name implies, digger bees are true bees (as opposed to wasps) that make nests in the ground. They can do extensive damage to lawns.

Because they can be present in very large numbers, digger bees can be very intimidating. They are not very aggressive, however. They will sting if they're threatened, but otherwise pretty much ignore people.

Here are some pictures of wasp, hornet, and other stinging insect work we've done in and around Metro Atlanta.